Silent Santa being offered for kids, adults with sensory needs 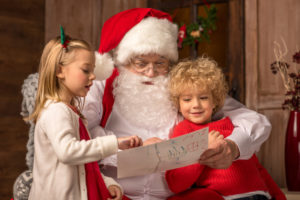 AMMON- For the first time in eastern Idaho, a Silent Santa is being offered for children and adults with sensory needs.

A Santa Claus at the mall can be a loud, bright and overwhelming experience for people with autism and other sensory needs. But this year, families have a quieter option. Connections Therapy Centers, East Idaho Credit Union and the City of Ammon are teaming up for a night called Silent Santa.

The evening is designed to be sensory-friendly with a quiet, calm environment. Families come by appointment so there isn’t a line. This is a first for many families have not been able to have the traditional Santa experience because the lights, sounds and long lines can be so overwhelming for children with autism and other sensory issues.

Michelle Dahlberg, owner of Connections Therapy Centers and a Speech-Language Pathologist, says she is thrilled to help bring this event to the area.

“So many families have not been able to have the Santa experience with their children because of sensory issues,” she said. “This gives these children the chance to visit with Santa and make memories but in a controlled environment where their sensory needs can be met.”

Lindsay Bischoff will be bringing her 7-year-old son, Parker, who is on the autism spectrum, to the event.

“I honestly don’t know how much Parker will engage with Santa but he is super excited to get a Lightning McQueen for Christmas. He has never actually met Santa so it will be an exciting opportunity for him.”

The event is free but a reservation is required. Email cala@connectionstherapies.com to schedule an appointment. The event is Dec. 9 and 10 at Ammon City Hall.