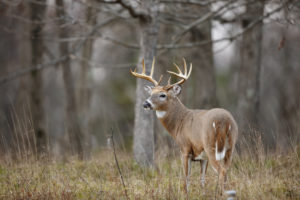 The following is a news release from Idaho Fish and Game. Stock image.

SALMON — Idaho Fish and Game is investigating a buck white-tailed deer that was shot and left to waste near Kenney Creek, south of Salmon.

The buck was discovered Oct. 20 on private property, and officers believe it was likely shot from the Lemhi Backroad. The antlers were removed and no meat was taken.

Evidence was collected at the scene, but officers hope to learn more from any eyewitness or others who have knowledge of the poaching.

“Someone knows about this and we’d like to visit with them,” said Fish and Game Conservation Officer Chad Wippermann. “It is unlawful for anyone to possess antlers from game animals that were killed unnaturally.”

Citizens Against Poaching (CAP) is offering a reward for information and callers can remain anonymous. Call the CAP hotline at 1-800-632-5999 twenty-four hours a day or the Fish and Game office in Salmon at 208-756-2271 weekdays.

Published in Local and Outdoors